Anyone who knows me, will tell you that out of the three* disciplines of triathlon, swim is my favourite and strongest discipline, although over summer, cycling nearly won out on that. I am happiest near, in or on water (and preferably a mountain/hill or two dotted about). I swear I was a mermaid in a former life. Those same people will also tell you have frustrated I’ve been with my swimming in the last 18 months.

I trained ridiculously hard and consistently over winter 2016/17 on my swim and in the run up to ITU Leeds Standard Triathlon, I was managing 7:30 400m – NOT majorly fast when compared to the speedy club members but a huge improvement from the year previous. I’d moved up the training lanes to sit comfortably in the top half of the club, and even managed to be 4th out of 12 club members racing in the Standard distance tri at Leeds that summer (31 min 1500m swim – it was a novelty overtaking people!). This came with a cost. Not enough S&C work resulted in a rotary cuff issue that put an end to my swimming for quite a while. This, over time and with some enforced rest of sorts, improved but the issue moved to my thoracic spine and lateral muscle area – tightness and soreness, that has made me really weary of swimming and aggravating it – however… I think I’ve got the solution and there is light at the end of the tunnel.

I’d tried sports massages (which have helped massively and still do) and I’d tried resting it, with no real improvement. I’d tried cupping and other things too but no joy. I joined the gym to try and get on top of my S&C – started to help but I’ll admit I got lazy – I know its a necessary evil really but such is life (I will get back on it, even if its only one or two sessions a week). So what did actually change?

I’m guilty of not stretching enough and I do get so tight! Looking through the gym classes – I’m a big fan of yoga and I’m not really being one of these Les Mills Grit session girls, I signed up for the Pure Stretch classes. Wanting to make the most of my ridiculously expensive gym membership, I decided to give them ago. Well what a revelation they have turned out to be! Stretch classes have massively helped the back/shoulder issue. It’s not completely gone but it has helped so much more than I ever thought. Although at the moment, I’ve been going 3 to 4 times a week – well it is the off season so to speak. I know I am rubbish at doing it on my own so just going to a class and doing what I’m told has really helped. Although it was helping – I decided after bashing it out on a bouldering wall I should really go see a physiotherapist again and self-refereed through the NHS – I got an appointment in two weeks. I suppose it was really for reassurance that I hadn’t done the damage that I thought I might have. I did, and got some new stretches to help and told that muscular issues like mine do seem to take forever to heal but if the stretch and massage was working to keep with it.

This was all I needed and I bashed out a nice 2.5k set on Wednesday and felt that maybe the time was right to start thinking more seriously about building my swim fitness and speed back up – especially as my back didn’t hurt! I also swam with a mate last night which pushed me, simply because I know I’m a generally better swimmer than him and had that reputation to maintain (he whoops me on the run and bike so its my only wee boast), and reminded me that I need to get some speed sets in.

This has all made me a very happy swimmer this week and I have taken the swim sets from IronFit Triathlon Training for Women and typed them up, printed them and am about to laminate them, to help me sort out some sort of training plan for my swimming so it isn’t aimless. I am so excited about the prospect of getting back to swimming three to four times a week again. As one of the swim coaches at the club sessions keeps reminding me, swim 2-3 times to maintain, 4 times or more to improve! I’ve also found some other training sets this morning that I think will be useful. Tied in with a better S&C routine, I feel excited about winter training. I just need to figure out HOW to fit in the running and the cycling now. Maybe some run/swim sessions and maybe swim/bike sessions – just to mix it up! 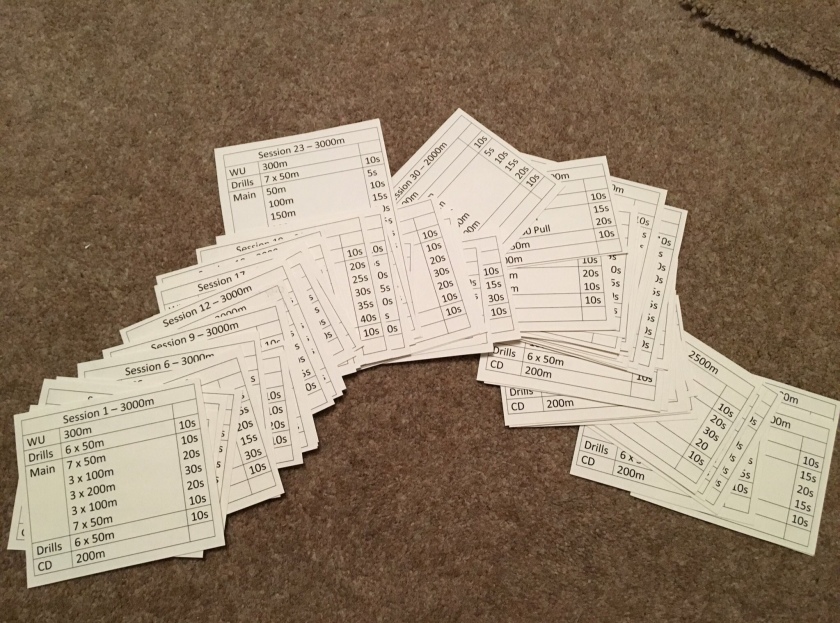 One thought on “Swimmer’s sorrows”