Well what a loada rubbish that was. Thursday evening is last becoming one of my favourite nights of the week simply due to Time Trials but tonight I was genuinely quite ready to chuck it all in and throw my beloved Ridley into a hedge. I also have a new found appreciation as to why pro cyclists will do almost anything to avoid germs and nasty bugs.

I shouldn’t make excuses but hear me out. I started with a sore throat at the beginning of the week. I was actually a bit concerned it might turn into tonsillitis but its morphed into a chesty cough/cold. Every now and then I am having horrible chesty coughing fits to the extent it sounds like I am going to cough up a lung. Deep joy. Hindsight is telling me that racing tonight was a bad idea and I should have marshalled.

Either way – I rocked up in a pretty good mood. Tonight’s TT route is ridiculously pretty but also VERY rolling but with some fab decent and some reasonably nice long flats, followed by some awful rolling (‘undulating’) hills back in. Usual banter with mates – whats been nice this year so far is that there have been more club members rock up and I am starting to slowly get to know other riders from the other clubs. All well and good. I refused to sign on until they had so I was somewhere near the back. Bike set up, a good coughing fit, ready to roll.

So, rolled up to start line, usual rigmarole – all good. Set off. All good. First left hand turn. All good.

Issues with breaks caused me to stop – they were sticking. We had to alter these to suit new wheels as they are wider rims that the factory fit ones, but even so, they had been fine on the warm up. Sorted it, carried on – with what felt like nothing in my legs. Brilliant. Carried on, knowing full well that I wasn’t going to PB tonight – but ah well. Enjoy the sun and the views. All good.

Then I just seemed to have problems with my gears. This might be my doing and I think I’ve knocked something out of sync. Either way, it put myself in a right mood. Looking at the rolling hills and my watch and thinking this is just absolute s***. I literally had nothing in me and I actually thought at one point I was going to bonk. Considering last time I did this course I averaged a nice 28.8kph average I was definitely not feeling it, and when I passed a friend marshalling I nearly considered bailing all together

It was that bad an attempt tonight that I had two mates set out to come find me, thats how worried they were – they thought I’d had a puncture but no. They had both gone opposite ways around the course to come find me – which to be fair, all kudos to them looking out for me. It took me a good amount of time to actually chill out. I passed the finish line and literally just carried back on until  one of my mates found me – I felt a bit bad as I’d actually just cycled off with my race number and ignored TT etiquette of shouting out my number passed the timer. Ah well.

Catching up with the first mate, I slowly started calming down and between him and another, put my head back in its rightful place – its always useful/good to have someone close to spout off at when things go south! And by the time the second mate who had come to find me, actually found me, I was in the pub. Properly calm.

I am just putting it down to a bad day at the office and realising just how much of an effect having a cold has on my cycling (and maybe not eating enough today). More so than on my running. Or maybe it’s just that I care more about my cycling?

This has, along with a facebook post from earlier, got me thinking about Holkham and whether to change my race to September – but that is for another post.

It isn’t a secret that I don’t enjoy running. I find it hard to push myself to want to get better but I know that if I ran more and trained better – I would have better results. When it comes to cycling and swimming – I do not have these qualms. Most of the time. I also have found that I love a good TT.

Tonight’s TT was, to be blunt, both short and awful.

4 miles of me wondering why I was there.

To drive to the wrong side of town to ride 6 miles. No wonder one of my mates didn’t rock up. I’ll be having words!

Either way – a baptism of fire. The first two miles were great, but if you go down, you have to come back up. I really have zero strength on the bike and really need to go ride some hills. It was a hard slog, although I had ridden 20 miles in the morning – one of my favourite routes that takes in my favourite TT too!

All the pain of cycling uphill was self rewarded with Guiness and chips and a bit of a natter – so all in all – not too bad an evening. My prediction on my time was pretty spot on too!

Roll on next week!

‘Running hills breaks up your rhythm and forces your muscles to adapt to new stresses. The result? You become stronger.‘ Eamonn Coghlan

This quote feels like it should be about my life – the last few months have been an uphill battle to some extent, finding myself again and working out what I want in life but thats all to deep for this time of night!

Training! That’s where it’s at. I’ve been a bit lax recently, it being ‘off season’ so to speak but I am starting to find my mojo again I think.

I swam this morning – 2.5k in 58 minutes – which I was quite happy with. Arm/back isn’t too sore at the moment, and nowhere near as bad as I thought it would be. That was a silly o’clock alarm. 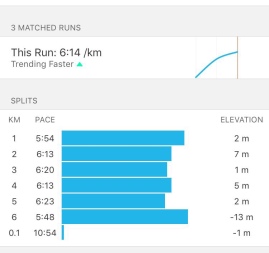 Tonight I ran. I very nearly didn’t go but sitting on my backside isn’t going to get me any better so I dragged myself up and out of the house to meet other club mates for a run – hills, hills and more hills, with some drills thrown in for good measure! This is my third hill rep session – next month the focus changes but as you can see from the picture, this run is starting to trend faster. As anyone who trains know, actually seeing progress makes such a difference to attitude and thought process. Hills and drills are clearly paying off. Its motivating to actually see progress and feel it too. I ALMOST enjoyed running tonight.

Talking of motivation, I am off to a talk by Nicky Spinks tomorrow night – I am all for looking for sources of inspiration and mojo! Should be good. Ive seen her before but she’s done so much since too! Looking forward to that one!

I have a real love hate relationship with running and having September off was amazing but equally as much as I moan about running, I make a rod for my own back – I do run better though when I a) run with others and b) commit to running with others – its makes me go and do it.