The title of this blog post and the nature of how this blog came about suggests that it should be about relationships and life and looking forward rather than back. Well, I COULD have written a post like that – and maybe I will as I have temporarily  given up on dating and have currently resigned myself to being single a bit longer (no bad thing) – although… no – this isn’t about that.

I like paper to do lists, I like paper diaries and I like paper wall planners. Although I have taken to using my phone diary a lot as it syncs to my laptop diary and I can print that off all colour coordinated and blocked out. Saves me a job! This has got me thinking – how to other people plan out their year?

I find that a huge wall planner, next to my desk in my office works best. Academic of course…

Its even got a basic code – races that I am interested in go on – regardless. As soon as they are ‘booked’ or confirmed – I put a cloud round them. Holidays have a line through them. It works! It really does! When I am sat working in my office (which, when it is tidy, is more frequent that it is at the moment) and I am wondering what my plans are/training needs are, I can quick glance at what is coming up – I can visually see the space/time between events – which makes planning so much easier. It also means that if I get my way then May next year will be bust and I need to save some serious money to do what I want!

I am VERY excited though – which probably means actually, dating would not be wise… 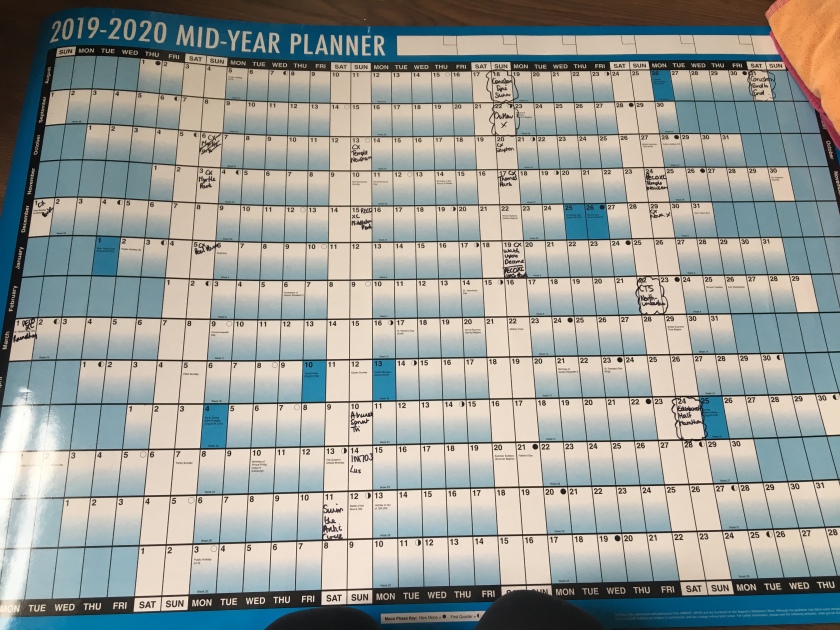 ‘And at the end of the day, your feet should be dirty, your hair messy and your eyes sparkling.’ Shanti

After waiting a week to have a proper play on the new cyclocross bike (now known as the Ridders), the mudguards came off, the chain was given a quick clean and the brakes given a bit of adjustment – the time had come to actually go and play. The bikes were bundled into the back of the car and the mini road trip to Sherwood Pines was done.

I had been looking forward to this all week. I am not a fan of mountain bikes really, coming from a roadie background, I don’t think this is that surprising. So the cross bike was really a more natural choice. I initially felt a bit out of place – ours were the only CX bikes there and I’ve never ridden in SPD Mountain bike cleats but that passed. Quick. Initial start wasn’t good – one cleat on upside down had resulted in frustration in not being able to clip in, but once rectified, it was time to go and play.

Heading to Sherwood Pines has been on my To Do list for quite a while – but with it being down in Nottinghamshire, I never really got chance to go. Sherwood Pines is a lot flatter than Dalby Forest, and we initially started out on the Blue route – well, my bike handling skills need some work but on the most part – it was so much fun! In my head, it was the cycling equivalent of trail/XC running. I was not really far off. Absolutely loved bombing around the course and not really worrying about speed – so much so I was wishing we’d done two (next time). Even had a bit of a cheeky play on some of the red route sections.

I love my roadies – don’t get me wrong, but this was just so much fun! I’ve got to do some serious practise but for a first attempt, it wasn’t bad! Itchy feet to be back must be a good sign right?

As for having a go at racing – I think it is definitely on the cards – especially after talking to one of the club members this afternoon. I feel this can only be a good thing for my road cycling. I am, however, glad that it hadn’t been awful weather before hand!

‘You can’t buy happiness but you can buy a bike and that’s pretty close.’ Anonymous

Yesterday was indeed a day of great happiness. For various reasons.

It started with a decent swim (all the best days usually involve swimming) at the gym, and was followed by a very long solo road trip. I say very long, it wasn’t too bad to be honest but the traffic was a bit rubbish. The swim and solo road trip weren’t the cause of the great happiness that washed over me.

It all started over a week ago – a message from a friend regarding a CX bike he’d seen on Facebook and a frantic text to me to tell me about it and persuade me to call about it. I did, and in doing so, I ended up travelling up to Newcastle to go look at a second hand, extra small, Ridley XBow (being a short female, second hand bikes that fit are quite rare!).

I had been debating cyclocross for cross training but it would appear I have been lured to the dark side of cycling after all it would seem as I came home with said bike. I came home poorer but also richer – nothing quite beats N+1 in all honesty. I was grinning from ear to ear all the way home! It helps that I like the paint job on it better than more recent models.

The problem is now, I need to sort out the mudguards – bike hasn’t been raced and used more as a winter hack/commuter and I think I need to tweak a bit with the saddle height. Saying that though, the lady I bought the bike off had a shorted stem put on it – which is what I had to do to my Ridley Liz. I also need to sort out the cleats for the shoes as I’m used to SPD-SL and these aren’t! Regardless….

Seriously gutted I won’t get a chance to play until the end of the week!

Best get a move on and up my bike handling skills!

What have I let myself in for?! (No one mention MTB – I fear the worse!)